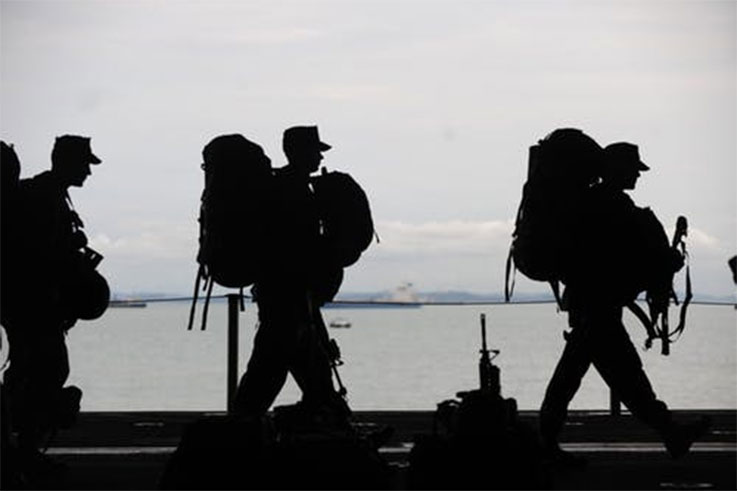 War is one of the most unsettling and painful experiences for people who witness the wrath of it. Thousands of lives are lost, and homes are shattered. Soldiers and their families are the worst affected. However, people are often unaware of the fact that hundreds of army chaplains, who are meant to provide religious aid and solace to these brave hearts, are also a part of this struggle. Like the soldiers, they too, witness the ravages and bear the brunt of war. There are situations when they look at the destruction around and feel helpless. They are engulfed by the feeling of powerlessness and fight a long battle with themselves to come out of it. But what exactly is the feeling of powerlessness?

The Feeling of Powerlessness

The feeling of powerlessness is something that prevails due to the inability to affect or alter a certain situation and steer it in a positive direction. In fact, this is a feeling that is not just restricted to military chaplains but affects the leaders, responders, caregivers, and other individuals associated with the act of ministering love.

Speaking from a chaplain’s point of view, the most evident point of powerlessness is during a war. A chaplain might want to extend his hands to save a severely injured soldier, stop the ruthless bouts of enemy shelling, or take away the fear prevailing in the minds of people scurrying into shelters. Nevertheless, they cannot do any of these. All they can do is hold their hands and pray for their safety and reside in their own sense of absolute powerlessness.

The feeling of powerlessness is said to be the most difficult struggle of army chaplains with themselves for a certain period. Thus, a small research was conducted to discover the truth behind this statement. The findings indicated that several chaplains were struggling to deal with similar feelings and were working towards discovering ways to resolve them. It is from this point if transition that people begin to overcome their feeling of helplessness and appreciate their presence and contribution to a certain situation. They try and focus not on their inability to affect a circumstance, but their momentary input to the situation.

Below enlisted are the most dominant feelings or thoughts prevalent among chaplains during the period of transition:

Due to the suppressed feeling of powerlessness for a long time, individuals during their struggle with themselves often unconsciously question the presence of God or His willingness to act and tend to desire to be godlike or an all-powerful entity. We tend to feel powerful and filled with pride when we can fix a certain distorted situation and powerless when they cannot. Nevertheless, there are instances when a person tends to lose faith and belief in the fact that God can fix what is wrong. It is then that they begin to give themselves all the credit for attaining success in solving a problem, thus deeming themselves to be godlike.

During the interviews conducted through the research, several chaplains put across situations of war when they had to fight this inevitable feeling of helplessness. Even though they witnessed soldiers hit with shrapnel cry in pain and agony, they could not do anything substantial. All they did was sit back, hold the hands of the wounded and pray.

Though most questions on this subject appear to be rhetorical, people are either experiencing these feelings now or have already been through them in the past. The interviews, however, revealed that there was a certain section of people who had tried to work on these feelings and had successfully been able to resolve them. They embraced the power within them while accepting the limitations of these powers at the same time.

The most important takeaways of the above research were, however, the subsequent developments in the behavior and characteristics of these people who fought back. It was the change that they chose to bring about in their vision towards life and their contributions in the lives of hundreds of soldiers and their families. Irrespective of the adversities in conditions, there are several people who have fought back and worked towards resolving their feeling of powerlessness and moved towards a more developed and mature faith. There are five specific characteristics of such individuals. These are as follows:

These individuals developed the ability to witness themselves in the right context. They reminded themselves that their identity lay in the Supreme Lord and not in their jobs.

People learned to value their contributions and realized the value of being present. They accepted the fact that they were a ray of hope when all people saw were distress and pain.

Accepting the fact that one is not all-powerful releases them from the clutches of pretense and pride. It helps you accept the limits exerted on you by God and thus instills you with a sense of humility.

Helplessness arises when one relies on himself rather than God. Though not a feeling to which one gives in consciously, developing strength in weakness can be done through complete dependence on Christ.

People undeniably aware of their finiteness know how important it is to refrain from taking responsibility for issues created by others. They accept the fact that not everything is under their control and that they can do as much as is within their capability.

Chaplains and leaders who have conquered their fears of powerlessness essentially learn to inculcate all the above attainments in their lives. They accept themselves for who they are and value the contribution they can make to the lives of others. Powerlessness is not a prevailing drawback. It can transform into their greatest strength when backed by trust and faith.